This past weekend, I was driven to drive up north for a family visit and to help friends move into a new house. I normally make this 700+ mile trip once or sometimes twice a month and don’t both to photograph anything along the way. However, this time I was determined to get something solid to post here.

My route to northern New Mexico is from my home in Las Cruces, NM to Jamestown, NM. Jamestown is a small (less than 400 people according to a 2000 census) settlement approximately 20 miles east of Gallup and about 7 miles west of the Continental Divide. The elevation is 7,200 ft so it’s always safe to say there will be some snow on the ground every time I make the drive up during the winter months. It’s about the only snow I see anymore.

Along this route, I always pass through Hatch, NM. The slogan for the village (less than 2000 people according to a 2010 census) is “The Chile Capital of the World.” Many travelers (some from around the world) come here to see the famous the Hatch Chile Festival which is held every Labor Day. The most popular item here for my family is the Green Chile Pecan Brittle candy. I get several requests from various people to “bring some of that good brittle!” 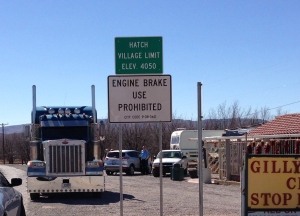 There are many chile crops around Hatch, but this was the most convenient one to photograph.

Hatch is littered with several little Mom and Pop shops on the side of the road. Some sell numerous little souvenirs, while others focus on just selling chile.

My personal favorite shop (and the one where I get the Green Chile Brittle candy) is the Chile Fanatic. This is a small place stuffed with so many little crafts, ceramic pottery, ristras (arrangements of chiles) and small sculptures. 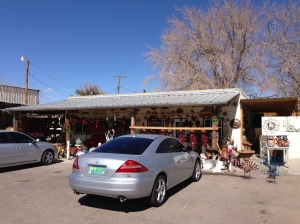 If you allow your eyes to just glaze over the interior, you’d be sure to get a headache since there is so much color and texture! 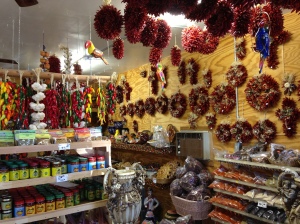 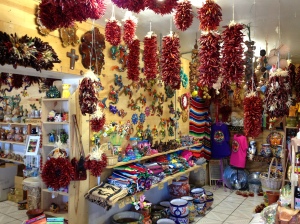 And here’s the reason why I stop…to pick up some of these bad boys. They also have Red Chile, and Chipotle Brittle. Also, I often find Green and Red Chile Marmalade.

Here’s some examples of the random but cool little things they carry. From what I can gather, this place is owned by a Mexican family who resides in the back of the store. All the ristras are handmade as well as many (but not all) of the other items for sale. There’s a lot of talent here. 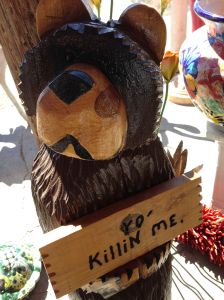 This isn’t my thing, but many people come to just buy bags of chiles. 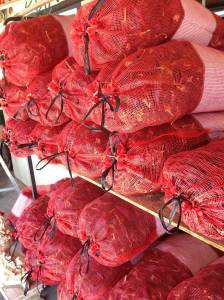 After leaving Hatch, it’s a pretty long, dull drive until you get closer to the The Sangre de Cristo Mountains near Albuquerque. Here’s an Instagram pic I took on the way near Los Lunas, NM.

Shortly after coming through Los Lunas, I glanced down to see a rather amusing mileage reading…

Fast forward a few days, and I was ready to depart and head for home. I woke up to find myself looking for an ice scraper. 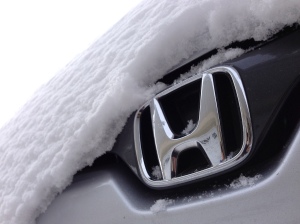 Even though I’ve driven in snow plenty of times, I’d rather just avoid it if I can. But sometimes, there’s no getting around it. (And maybe I should stop taking pictures while driving in it)

On my way back, it was dreadfully windy and I decided to take it easy, bypass the freeways full of swaying semis and drive down Highway 1 which runs by the Bosque Del Apache Wildlife Refuge. I’ve mentioned this in a previous post that it’s a pretty remarkable refuge which can hold tens of thousands of birds (all of varying species). Sadly, due to the weather and the time of day, there wasn’t much wildlife to be seen. I’ll revisit this again when it warms up.

The next day after arriving home, I decided to give the Accord a bath to remove the salts and grime from the wintery conditions. It wasn’t bad, but filthy enough to make me uneasy. Plus, when dealing with salts, I want to get that stuff off as soon as possible. 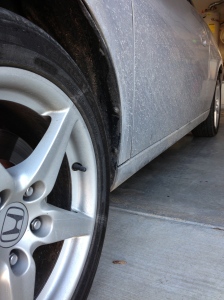 This is a famous area to start rusting on a lot of cars.

I always use a two-bucket-method when washing. One bucket sports my tire brush and generic sponge for the wheels, wheel wells  and lower panels that hold the most grime. The second bucket holds my microfiber sponge for the upper portions of the car. The idea is not to contaminate the cleaner bucket with the gunk from the dirtiest areas of the car. Avoids scratches as much as possible. I nearly always use Meguiars Gold Class Car Wash (as you may have seen from my other posts, I pretty much predominantly use Meguiar’s).

I start by cleaning the wheels and wheel wells first.

Then I wash from the roof then downward. My theory (could be completely false) is that the soapy water from washing the roof first will run down the sides and loosen up the grime and allow it to release from the surface with minimal scratching when I eventually clean those areas. 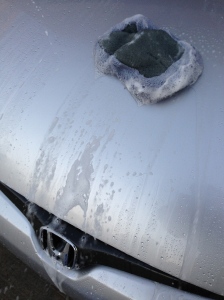 For a final rinse, I take off my nozzle and run a steady flow of water all over the car. It actually makes it a lot easier to dry this way as most of the water rolls right off the panels.

When possible, I always dry with a clean Microfiber towel. More efforts to prevent scratching.

While drying, another trick I use is to spray some quick detailer spray while wiping the panels dry. This lubricates the surface (again to prevent scratching and marring) as well as enhancing the paint finish.

The final results. It was getting dark in this pic. 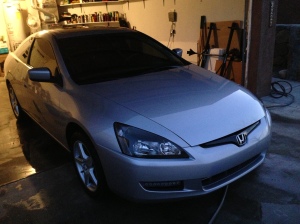 Today, I took these pictures to see how my recently re-installed “Accord V6” badge looks on a freshly washed car. 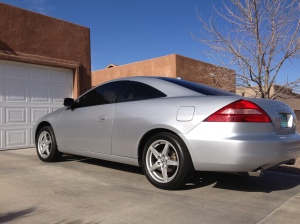 2 thoughts on “Hatch, NM and Snow”