This week has been pretty quiet for me. After being on the road for practically every weekend these past two months, I decided to stay in and do a few things around the house as well as for the Accord. After the great drive last week to White Sands, some cleaning was in order. The windy day at the dunes meant lots and lots of sand to collect everywhere. It blew into practically every crevice on and in the car. An alarming find was around the oil dipstick opening. This was when I was about to check the oil this past Thursday. I just happened to spot several nasty little sand particles gathered around the bottom of the dipstick handle, just anxiously waiting to fall and take up residence in the engine block. Not good. I sprayed with compressed air and followed with a thorough wipe down to remove all the sand.

Other areas I discovered sand was being an uninvited guest, were the window tracks and the rubber door seals. The windows would make a spine-tingling screatching noise every time I lowered them, so the window tracks/channels had to have a thoughrouh cleaning. I just used a wet microfiber towel wrapped in a credit card to get into the narrow channels. 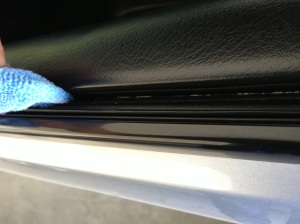 After the first pass, this is how much sand clumped up on the end of the towel. 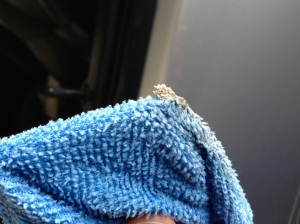 Another area of concern were the inner window seals (where the window snuggles up against the frame when rolled up.) If I’d left the sand stuck there, I’m sure it would eventually start scratching my newly installed tint as the window is opened and closed repeatedly with time. Lesson learned from my Acura RSX as that’s exactly what happened when I neglected it. Both windows are now quiet and smooth going as they should be. Call me crazy, but all this cleaning was fun, necessary and the results were satisfying.

Here I caught a pic of me filling her up at the local “Pic Quick” in town. The Accord, even with the V6, gets pretty good mileage. I’ve been getting a rather consistent 26-27MPG in the city and I’ve topped 32MPG on the highway at one point. But more realistically highway driving yields 29-30MPG. The fact it doesn’t require premium grade gas is another plus! I have read on the Accord online forums that the V6 models can have oil consumption tendencies. I haven’t been a victim of such a inconvenience yet and hope I never will.

Visual news: I’ve made a recent purchase that’s going to start the process of making a rather drastic transformation of the Accord. I bought the Accord an OEM Honda Factory Performance (HFP) lower front spoiler! The HFP package came with an entire body kit (front spoiler, extended side skirts and rear skirt) and a sport tuned suspension which lowers the car 1 inch, sharpens steering and decreases body roll while obtaining a factory-like ride. All of this I eventually plan to install and if purchased new, it comes with Honda’s standard 3 year warranty. However, cost is an issue and I’ll go little by little. This front spoiler is the start of this upgrade package. It came brand new, pre-painted and it’s a hard item to come by since Honda doesn’t make the HFP body kits anymore. I was lucky enough to snatch this one up from a Honda dealer in Ohio. The other body kit elements will be tricky to find too, but I’ll deal with that later. Suspension upgrade will come much later on.

Here’s the box the front spoiler came in. It was nearly as big as the doors in my house! 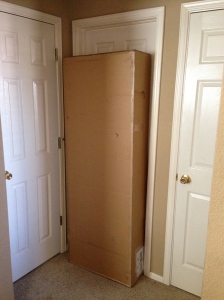 They did a nice job of packing it to protect the paint.

The installation was simple. About 9 bolts/screws and some automotive double-sided tape. No drilling, cutting or even removing the front bumper was needed. So, here’s the front of the Accord before:

It actually doesn’t look too out of place with the stock side skirts, but I will still be on the search for some HFP ones.

I love how the front spoiler lines up nicely with the RSX wheels—the offset is a little more aggressive than the stock Accord wheels, I believe. 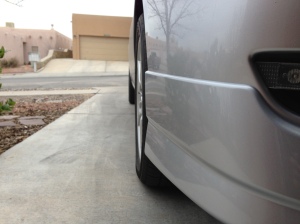 Overall, I’m very happy with the results and look forward to getting further into my HFP upgrade. Hope everyone is having a great weekend!