With the weather turning into spring around here and the temps soaring to the mid 80’s (˚F), it’s only fitting to throw on a pair of shorts, a few bottles of water and head up to the mountains for a good afternoon hike. This is exactly what my friends, Jouhl, Alec and I did. We went to the Aguirre Springs recreational area east of Las Cruces. It’s about a 15 mile drive there, and about 1,500 ft higher than the city being on the east slopes of the Organ Mts. In addition to hiking, this area accommodates camping, horseback riding, picnicking, and wildlife watching.

The hike on the trail called, Pine Tree Trail, consisted of dodging numerous boulders, balancing on ledges with 50ft drops and ducking under pine trees all encompassed in the beauty of the Organ Mountains. The total distance of the hike was about 4.5 miles. Took about 3 hours to complete since we took our time, and the trail was quite rugged.  The red line in the map below shoes the edge of the road of Aguirre Springs. The black line outlines the trail.

Here’s some pix of the general area. 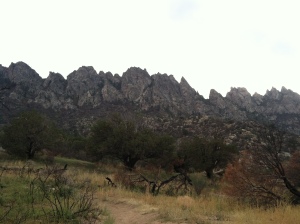 Here’s the parking area. Note how dark the windows all look? Those aren’t limo tints on all the cars. They are sunshades installed in the windshields since people plan to be away from their cars for a while. We were no exception.

The sign giving an overall view of the trail… 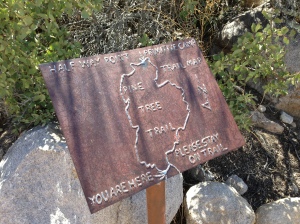 Alec (in red) and Jouhl (on right) checking out the trail…

And here we go! The trail has started… 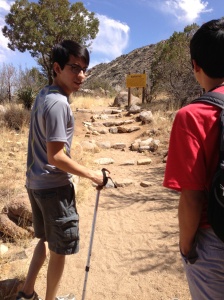 Here we are trying to decide where the trail continues. 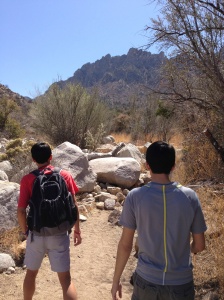 The higher we got, the more impressive the views became. To those of you in more wet climates, this probably doesn’t look like anything special. But to us, it’s a welcome change to the city. 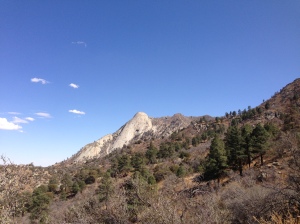 Hard to believe wild pines actually grow up here. From down on the road, the mountain looks absolutely bare and void of any vegetation. 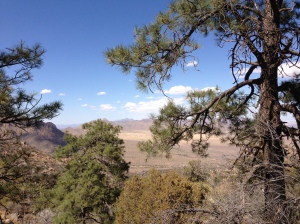 There had been a few fires in this area last year, and some of the half-charred trees look pretty cool!

Here we reached the halfway point at 6,880 ft. That’s 2,800 ft higher than the city, and the trail doesn’t go anywhere near the top of the mountain!

Here we are enjoying the view. Just so happened that I captured a hawk in the background.

Forgot what I was talking/gesturing at here. Most likely something about the landscape. 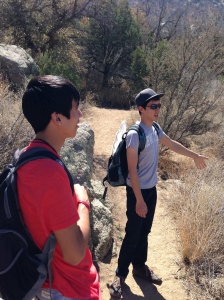 When we were done with the hike, our legs were wobbly, feet sore, backs ached, but we felt a sense of accomplishment. I love this sort of activity. There’s another trail on the other side of the mountain called Bayard Canyon that I’ve never been on. The length of this one is over 6 miles long—one way! Next time.

Yesterday, I was to go to The City of Bayard, NM for my job. Sadly, if the town is more than 100 miles away from Las Cruces, it is preferred that I take a company vehicle or a rental. Both of the company vehicles were in use, so I was to drive to Bayard in a rented 2012 Dodge Avenger SE. The total mileage for the trip was 206 miles. I’ve been to Bayard before, but I didn’t remember much of it. So, it was exciting to see the area again…while getting paid for it! It may be called, “City of Bayard” but like most New Mexico towns, it’s quite small. A bit over 2,500 was the latest population recording. (2000 census)

Here I am gassing up the Avenger.

A quick shot of the interior.

Here’s my driving impression of the Avenger:

When it was introduced in 2008, it sadly wasn’t a great success. It was critisized for feeling and being an outdated design with nothing special to offer. It was even voted for being one of the worst new cars of 2008 by Yahoo Autos. For 2012, it was reworked with a better interior and revised suspension. Despite those improvements, Consumer Reports didn’t recommend it. Neither did any other respectable auto critic that I know of. The particular Avenger I drove was the base SE model with the 2.4L 173-hp engine and 4-speed automatic combo. The power-train was sluggish. Getting up to speed on the highway or even accelerating from a stop light with the A/C on was painful. Noise levels of the power-train were pretty high too. On the plus side, the ride was pleasantly compliant and controlled. High speed tracking was excellent. Road noise was well suppressed as well. The interior materials were really good. Everything felt solid and well padded—like it would resist developing rattles years from now. Overall, this was a solid car, and I was pleased with the experience. I wouldn’t own one or even recommend one to somebody, but I applaud Dodge/Chrysler for their efforts. Who knows? Will the next redesign threaten the competition?

Here I am entering Bayard.

The side profile of the Avenger looks very much like the Charger. But I personally feel it doesn’t work as well. It doesn’t look particularly sleek or swift. Looks…awkward to me.

The town is hilly and comprised of mostly residential areas. 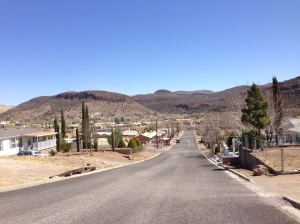 Some areas were fastinating to me as how different they looked from what I’m used to. 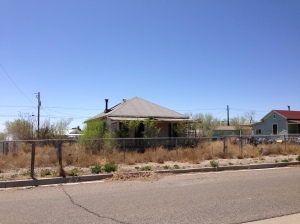 Check out this house: I bet you could buy it cheap! 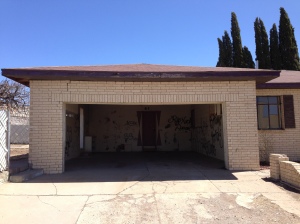 Here’s the Bayard City Hall where I was required to go. 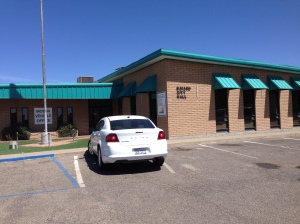 This street looked like it had seen better days, sadly.

This is downtown Hurley (a small town just a few miles south of Bayard) Not much happening here. 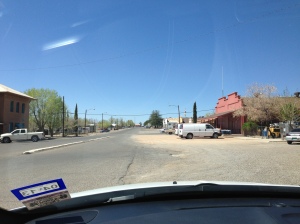 Overall, it was a neat trip. I didn’t drive around for leisure since I was on the clock. These were the only photos I was able to take along the way.