Happy 4th of July, folks! Hope you have a great day with family, friends full of good food and fireworks! Today I wanted to continue sharing our journey of the west.

Day 3 took us from Ontario, OR to Astoria, OR via crossing into Washington on Hwy 14. Total distance/time: 501 miles/8.9 hours 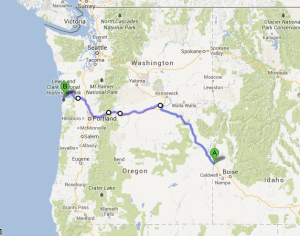 We set off early in the morning. Jouhl still capturing as many pictures as he can along the way.

Eastern Oregon and Washington are covered in much of what we saw in Idaho…rolling grassy hills with few trees. Here’s a shot with some windmills.

We took I-84 west to I-82 north into Washington where we would hook up with Hwy 14. This is a scenic byway which straddles the Washington/Oregon boarder along the massive Columbia river. 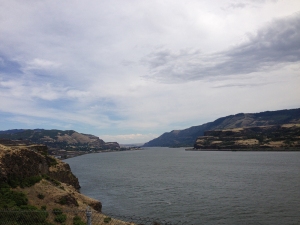 When we were about halfway accross the state, things started to get REALLY green! 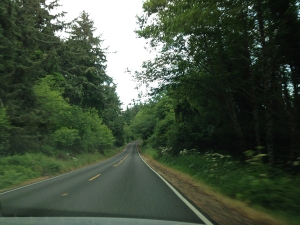 For the next few days, we encountered plenty of tunnels. Perfect opportunity to open the windows and drop down a few gears to let the engine sing! 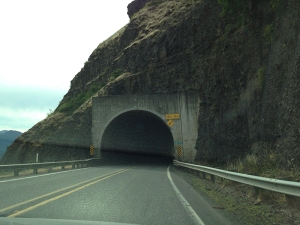 The further west we went, the more the landscape changed. It was quite a welcome site from living in the desert. 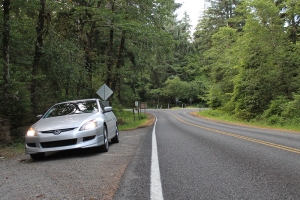 We finally reached the ocean! This was a scenic pullout where we stretched our legs and snapped quite a few pix. 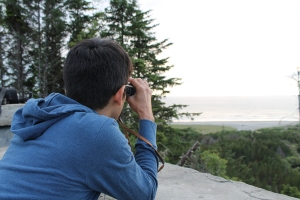 We could have stayed there for hours just gazing at the ocean, hearing the waves crash up against the shore, but the sun was setting and we needed to get to Astoria for a hotel.

Astoria, OR is a small town of about 9,500 which sits at the mouth of the Columbia river in the northwestern most portion of Oregon. I’ve always loved coming here in the past and this trip was no exception. We were to cross the mighty Astoria Bridge which crosses the Washington/Oregon border. It is the longest continuous truss-style bridge in North America. It can be seen in the background here with the Accord.

A better shot the the bridge with Astoria… 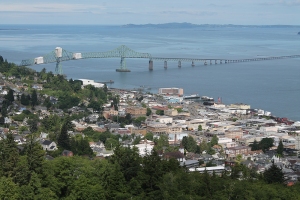 4 miles of driving on the open water. Always a pleasure…if a little unnerving.

I was in disbelief that the Accord I owned was driving here, on this bridge. The Accord which spent its entire life in the desert was driving in this. So, we had to turn around and do it again!

This portion of the bridge was built to allow for ships to pass beneath. At this time, the bridge was undergoing a major repainting which explains the various tarps on the sides. 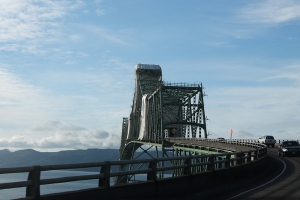 The only way of knowing when you’ve crossed the boarder is by a small sign which blends in with the trusses.

Day 4, we left our hotel early in the morning to go see the Astoria Column and then headed south along the coast on Hwy 101 to Florence, OR. Total distance/time: 183 miles/4hours. It was an easy day with lots of stops and sight seeing.

Here’s a shot of downtown Astoria, bathing in the morning sun.

The drive up to the column was quite steep. 2nd gear, 25MPH all the way, but the Accord didn’t make any fuss.

And finally, we’ve arrived! Only $2 for parking, and then you’re free to climb the 164 steps up to the top which is about 125ft.

It was a bit intimidating looking up at what we were about to climb. 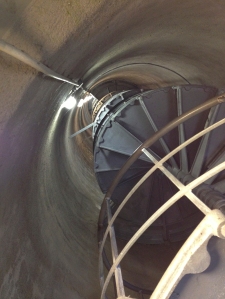 But once at the top, we were rewarded with breathtaking views of the town. 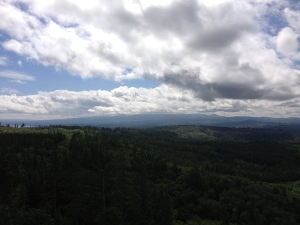 I’ve been to Astoria twice before, and this is the only time I’ve seen sunlight here. Light cloud cover and the temperature was 67˚F. Couldn’t have been more perfect weather! 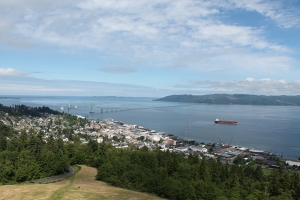 Me looking over the rail and amazed how small the cars in the parking lot appeared.

After the column, we stopped a few places here and there around town. Here’s a pic with my Accord’s first encounter with Seagulls. 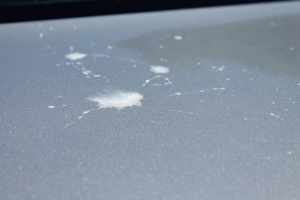 After cleaning off the poop, we hit the road. One cool thing about Oregon is the drastic change from rainforest to beach. Most areas, it is literally less than a mile between this 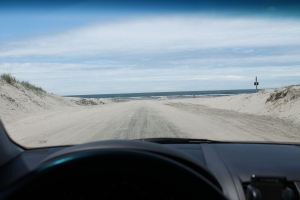 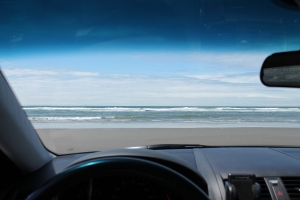 This is Sunset beach near Seaside, OR. One of the few beaches in Oregon where the sand is hard and there’s no restrictions on driving on it. Perfect for a few photo opportunities.

Not very often you’ll open the door to ocean!

Jouhl and I agreed that we could easily become beach-bums. 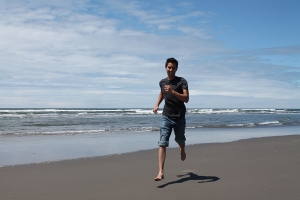 One of the few fully intact crab shells we found. 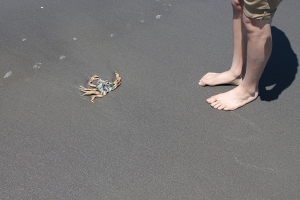