Fresh Detail for the TL

Happy Thursday! I don’t have any special “throw-back-Thursday” content to share, but I do have some reflections. Literally. It’s amazing how time flies. This January 16th marks the second month of ownership with the TL. With the weather warming up recently and my having some free time, I figured I’d give the exterior a good detail/paint correction. I started with a thorough wash to get the loose dirt and grime off.

After all was dry, I pulled into the garage to survey the condition of the paint. Looks pretty healthy and clean, right?

Wrong! I set up my halogen lights and they revealed just how scratched and bruised the paint had become. Causes? Most of the scratches came with the car when I bought it in November of 2013. A few careless wash jobs from Hoy Fox Acura and my recent trip to Fresno Acura added their fair share. This being the Crystal Black Pearl, every single little nick, scratch and clear coat imperfection will easily show up in direct sunlight or in this case, halogen lights.

The door handles were in a class of their own for extreme need of detail.

So scuffed and marred that there was virtually no shine to the paint inside the door handle.

So I settled down for the night and a good majority of the next day performing a full detail. My process to correct this was as follows:

Most of the chemicals were applied with my Porter Cable rotary buffer used at various RPMs. Let’s see how it all turned out!

With the first step, I opened up a fresh box of Meguiar’s clay bar kit.

I also made sure my pads were clean and dry with numerous clean microfiber clothes for buffing. Doesn’t make sense to spend hours correcting the paint and then adding new scratches by polishing with dirty rags, right?

Here’s the Meguiar’s 85 and 205 products. I’ve been using these for years and the results have been great. 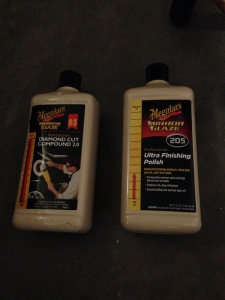 For the final polishing stage, here’s the Glaze which was applied with a new PC black pad. 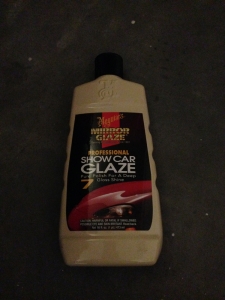 Sadly, the only wax I had on hand to finish it all off was Meguiar’s Carnauba Wax (red bottle). It’ s decent, but I know there are better waxes out there to give the absolute deepest gloss to the paint.

I started with spraying with paint with lubricator and rubbing the clay bar. 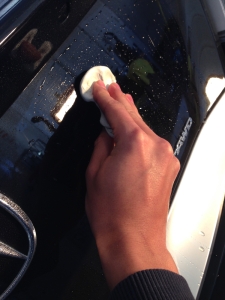 Amazing that even though the TL was just washed, grime was still lingering on the surface.

After the clay, I like to tape off a section to see the results of buffing at various RPMs. It gives a great before and after test.

Here’s with just the 85 Compound.

…and now with the polish stage complete. 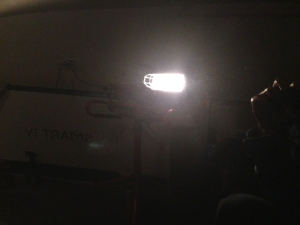 It made such a huge difference!

The hood shows the state of my messy and cluttered garage.

In addition to other little details on the car, I applied some Mother’s Metal Polish to clean up the exhaust tips.

Here’s a section of the rear bumper… 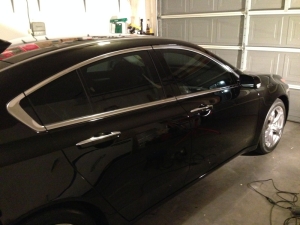 No car detail would be complete without a self pic in the paint.

Day three I took the TL out in the sun to see if I missed any areas.

I also gave some more business to superbrightleds.com for some LED license plate lights. I think they modernize the area so much. Why Acura insists on using traditional incandescent accessory bulbs on a $40,000+ car is beyond me. Here’s before the install…

And after. So much brighter with a nice white tint.

Even shows up on the backup camera.

To wrap up here, I’ll share a moment when my inner “red-neck” came out. I sold a leftover rear underbody spoiler from the Accord, and I had the challenge to drive it to UPS for shipment. Since Acura doesn’t allow the rear seats to fold down, I just stuffed the box as far in the trunk as it would go, and then taped the trunk down to the box. I then had a rather amusing/white-nuckle drive through town with 4ft of box sticking out with some microfiber rags taped on the edges to warn motorists there’s an idiot transporting something half the length of his car. Hey, it worked! 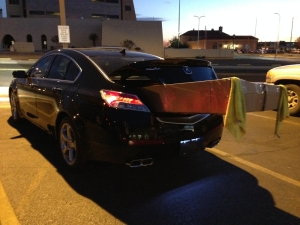 The backup camera was temporarily useless…

7 thoughts on “Fresh Detail for the TL”