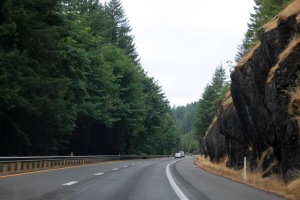 Departing Seattle meant taking the I-5 south through Olympia and towards the Northwest corner of Oregon. The 6 was driving smoothly and confidently with all that we were throwing at it aside from the highway stability concerns as mentioned in the previous post. The solution to that came shortly:

On one of the side roads we took departing Seattle, the tire pressure monitor screamed at me to pull over and check the pressure. I did. Stepping out of the car and visually inspecting them didn’t reveal any issues. I got out my tire pressure gauge to see what it would read and to my surprise, all of the tires were 15lbs under pressure. I was baffled as to how that could be. They were perfect when leaving New Mexico. My only assumption is that the altitude and temperature change from Las Cruces was so severe that these Bridgestones couldn’t keep up the pressure. In the end, I found a gas station, pumped them up and that made a huge difference in stability. No more wandering on the highway. Lesson learned.

Our destination for the night was Astoria. I love this little town (I could live there…that’s how much) and it was essential we all stay here for at least one night. Before getting there though, we made a quick stop in Long Beach, Washington to get a little ocean fix.  A small town of 1,300 people (2010 census) has a 28 mile continuous beach. As can be seen by the sign, they claim this to be the “World’s Longest Beach.” I highly doubt it is, but the “Longest Beach in America” might be quite fitting. Luckily, the beach offers nice firm, flat sand suitable for driving on. You can guess what I did next…

I did walk around a bit and enjoyed the scenery with the others. (From left to right: James, Alec, Jennifer) 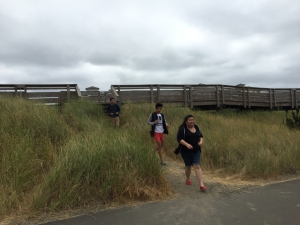 But, you can never take too many car photos…

On the southern end of the beach was a piece of a whale bone. Check out the size of that jaw! 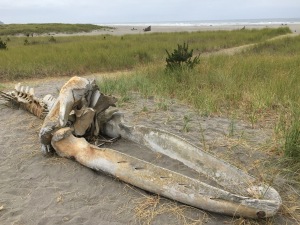 After Long Beach, it was time to head to Astoria. We took the Astoria Megler Bridge (longest continuous truss bridge in North America) from the Washington side. 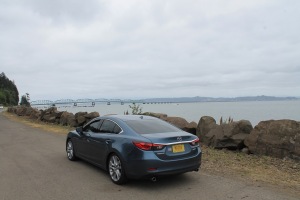 Eek! I love bridges and I bet Jennifer, Alec and James could easily spy my excitement.

We attempted to check out the Astoria Column again, but sadly it was being renovated. The views from the top…

A quick shot of downtown Astoria.

A little west of Astoria is Fort Stevens State Park – a once active military base and the target of a surprise WWII naval attack. We did a little fooling around here too. This is Battery Russell. A little history of it here:

Battery Russell was constructed between 1903 and 1904 by the U.S. Army Corps of Engineers for the U.S. Army Coast Artillery Corps. It was one of nine concrete gun batteries (emplacements for cannon or heavy artillery) built at Fort Stevens to conceal and protect mounted guns from enemy ships. Battery Russell was named for Brigadier General David A. Russell, who served with the U.S. 4th Infantry Regiment in the Oregon Territory and commanded Fort Yamhill before he was killed in action during the Civil War.

Battery Russell is known to be haunted, and people have reported hearing chains being drug around. There also have been reports of people seeing a man with a flashlight walking towards them and then suddenly vanish. 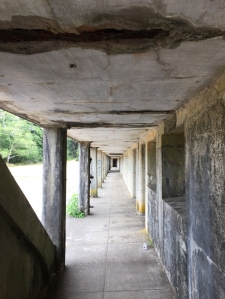 More history: this is the Wreck of Peter Iredale, a steel vessel that ran ashore in 1906 as it was sailing from Salina Cruz, MX with 1,000 tons of ballast and a crew of 27. It was originally bound for Portland when heavy winds brought it here. This is how it sits today:

A photo of the vessel shortly after the grounding in 1906.

In addition to these historical goodies, Fort Stevens offers nice campsites and plenty of rainforest to explore.

Later that afternoon, we grabbed some Chinese and snuggled down in our comfortable rooms at the Commodore Hotel. 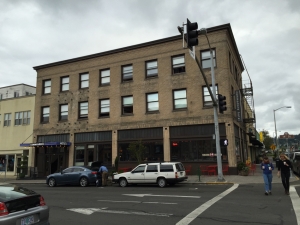 Next day was a drive to Portland, OR. Here was a nice trail through the rainforest we found along the way. 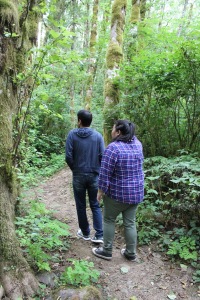 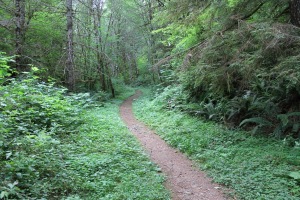 2hrs later, we arrived in Portland! (Not my photo — Just used this from Google to give an idea of the overall look)

We explored the downtown area quite a bit: 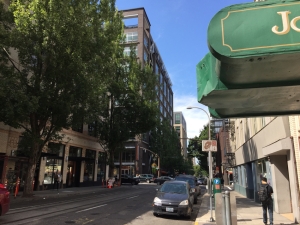 Lunch from the food trucks. James, Jennifer and I opted for Korean while Alec went for a creamy Boba smoothie.

Eating at one of the downtown plazas. 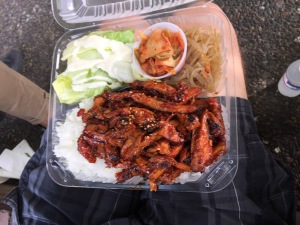 A stop in Portland wouldn’t be complete without a few Voodoo Doughnuts!

Yup, that’s bacon on maple (lower left) next to Captain Crunch on white! The upper right is the Dirt Doughnut which is covered in Oreos.

Here are their signature Voodoo Doll Doughnuts. They are filled with a red jelly that mimics blood oozing out after you bite into them. 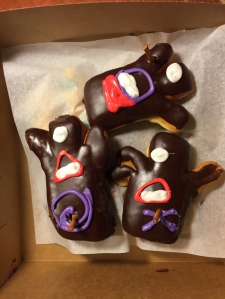 I saw my first ever ThinkCity electric car near the Japanese Gardens. This cheap (cost wise) Norwegian auto maker sold this pure electric city car worldwide that was capable of traveling 99 miles before completely depleting the batteries. Sadly, the company went bankrupt in 2011 and they are no more. 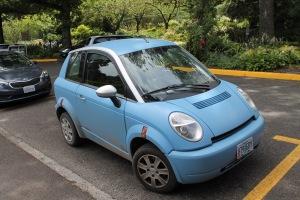 That does it for now…see you in Part III!